This Video is unable to play due to Privacy Settings.

Iceland’s retirement income system has been named the world’s best in its debut in the 13th annual Mercer CFA Institute Global Pension Index (MCGPI). The Netherlands and Denmark have taken second and third places respectively in the rankings, after a decade of competing for the top spot. In comparison, Switzerland ranks on a modest 11th place, but is still in the top third of the 43 systems analysed. Although the Swiss pension system is rated above average in all three subcategories, there is a need for improvement, particularly in the areas of adequacy and sustainability. Integrity, on the other hand, is rated well.

The MCGPI is a comprehensive study of global pension systems, accounting for two-thirds (65 per cent) of the world’s population. It benchmarks retirement income systems around the world highlighting some shortcomings in each system and suggests possible areas of reform that would provide more adequate and sustainable retirement benefits. The top three systems, all receiving an A-grade, were sustainable and well-governed systems, providing strong benefits to individuals. The study also reveals that there is much that pension systems can do to reduce the gender pension gap – an issue inherent in every system.

Iceland had the highest overall index value (84.2), closely followed by the Netherlands (83.5). Thailand had the lowest index value (40.6). In comparison, Switzerland received a total of 70 points, well above the average of 61. The Index uses the weighted average of the sub-indices of adequacy, sustainability and integrity. For each sub-index, the systems with the highest values were Iceland for adequacy (82.7), Iceland for sustainability (84.6) and Finland for integrity (93.1). The systems with the lowest values across the sub-indices were India for adequacy (33.5), Italy for sustainability (21.3) and the Philippines for integrity (35.0). Switzerland receives above-average grades for all three subcategories: 65.4 for adequacy (average: 62.2), 67.2 for sustainability (average: 51.7) and 81.3 for integrity (average: 72.1). However, only in the area of integrity can one really speak of a good rating. The area of adequacy has improved slightly compared to the previous year due to slightly higher net replacement rates.

“The pandemic has exacerbated socio-economic inequality in many parts of the world. At the same time, we are operating in a challenging market environment with historically low interest rates and, in some cases, negative returns, which make a central pillar of pension provision - the investment of contributions and the income generated from them - extremely difficult," comments Ivan Guidotti, Head of Investments at XO Investments and Committee Chair at the CFA Society Switzerland. "Women are also struggling with the gender pension gap, which in some cases leads to much lower benefits for half of the population worldwide. Policymakers and pension stakeholders need to act together and decisively to address these challenges and provide better, more secure livelihoods for future retirees. And they must create appropriate frameworks and opportunities for individuals to inform themselves and engage in their own pension provision."

Significant gender gaps in pension benefits are evident in all regions of the world. In Switzerland, according to the OECD, this gap is over 30 per cent, which is higher than the OECD average of 26 per cent.

There is no single cause for the gender pension gap, but a number of contributing factors. Some of them are well known, such as employment-related issues: More female part-time workers, periods out of the workforce for caring responsibilities and lower average salaries. But the study found that pension design flaws are also aggravating the issue. This includes non-mandatory accrual of pension benefits during parental leave, absence of pension credits while caring for young children or elderly parents in most systems, and the lack of indexation of pensions during retirement, which have a larger impact on women due to longer life expectancy.

“We know that closing the gender pension gap is an enormous challenge given the close link of the pension to employment and income patterns”, says Tobias Wolf, Head Advisory at Mercer Switzerland. "However, there are some possibilities for both politicians and pension funds to ease the situation somewhat. These include the removal of restrictions on joining pension funds due to low incomes or short periods of employment, as well as the reduction of the coordination offset for part-time workers."

Wolf also sees opportunities in the investment sector: "More than one third of pension benefits in the second pillar are financed through investment returns. There is a lot of potential for Swiss pension funds to optimise their investments and thus generate higher returns. These can be passed on directly through the interest on retirement assets and thus benefit not only women, but all insured persons through higher benefits. Just one per cent higher annual interest on an average income over the entire working life can lead to 20 per cent higher benefits in the pension phase."

In the expert's view, it is particularly important to have a strategic investment allocation that takes into account suitable asset classes from a global universe, especially in lucrative private markets, and relies on the appropriate managers. In addition, the implementation and governance of the investment strategy must be handled professionally. "Small and medium-sized funds, in particular, often do not have the necessary resources to consistently implement the investment process at the highest level. This is not just about investment allocation and manager selection," Wolf explains. "Often, the ongoing monitoring of the portfolio and the selected managers, as well as the monitoring of the markets and exploitation of investment opportunities that arise, present significant challenges. In addition, even larger funds often do not have the transparency and access to leading managers, while there is also a lack of negotiating power with regard to fees. Therefore, we see great demand for delegation of investment processes to an independent partner who can support the funds in a professional and efficient investment implementation". 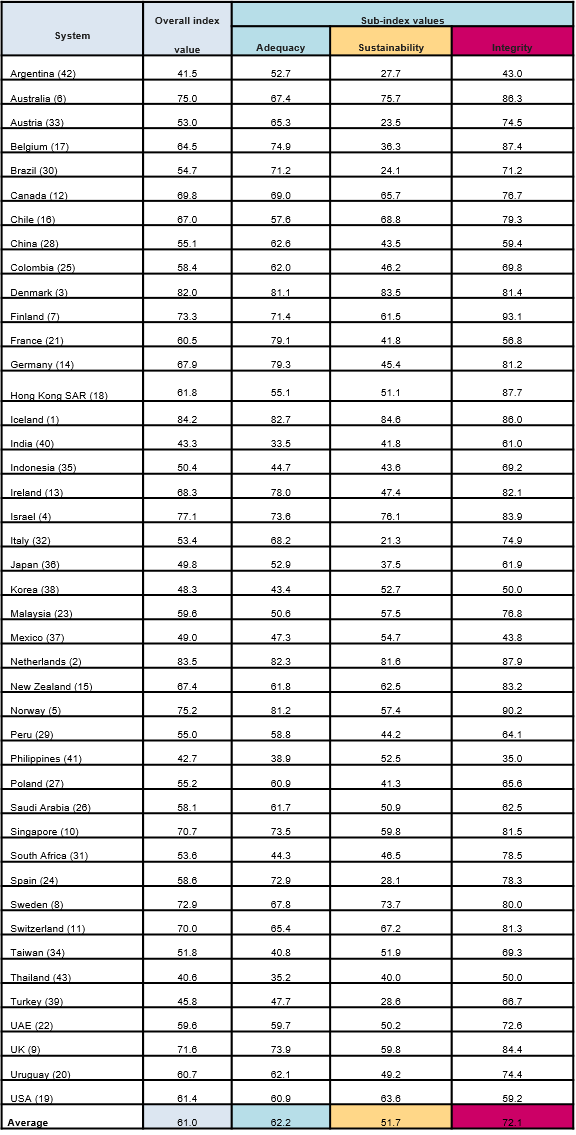 The Global Pension Index benchmarks retirement income systems around the world highlighting some shortcomings in each system and suggests possible areas of reform that would provide more adequate and sustainable retirement benefits.

The Global Pension Index is a collaborative research project sponsored by CFA Institute, the global association of investment professionals, in collaboration with the Monash Centre for Financial Studies (MCFS), part of Monash Business School at Monash University, and Mercer, a global leader in redefining the world of work and reshaping retirement and investment outcomes.

The Global Pension Index uses the weighted average of the sub-indices of adequacy, sustainability and integrity to measure each retirement system against more than 50 indicators.

Mercer believes in building brighter futures by redefining the world of work, reshaping retirement and investment outcomes, and unlocking real health and well-being. Mercer’s approximately 25,000 employees are based in 43 countries and the firm operates in 130 countries. Mercer is a business of Marsh McLennan (NYSE: MMC), the world’s leading professional services firm in the areas of risk, strategy and people, with 78,000 colleagues and annual revenue of over $18 billion. Through its market-leading businesses including Marsh, Guy Carpenter and Oliver Wyman, Marsh McLennan helps clients navigate an increasingly dynamic and complex environment. For more information, visit www.mercer.com. Follow Mercer on Twitter @Mercer.

CFA Institute is the global association of investment professionals that sets the standard for professional excellence and credentials. The organization is a champion of ethical behaviour in investment markets and a respected source of knowledge in the global financial community. Our aim is to create an environment where investors’ interests come first, markets function at their best, and economies grow. There are more than 175,000 CFA® charterholders worldwide in more than 160 markets. CFA Institute has nine offices worldwide and there are 160 local member societies. For more information, visit www.cfainstitute.org or follow us on Linkedin and Twitter at @CFAInstitute.

About the Monash Centre for Financial Studies (MCFS)

A research centre based within Monash University's Monash Business School, Australia, the MCFS aims to bring academic rigour into researching issues of practical relevance to the financial industry. Additionally, through its engagement programs, it facilitates two-way exchange of knowledge between academics and practitioners. The Centre’s developing research agenda is broad but has a current concentration on issues relevant to the asset management industry, including retirement savings, sustainable finance and technological disruption.